Dystopian Future Art: From Metropolis to The Great Eye 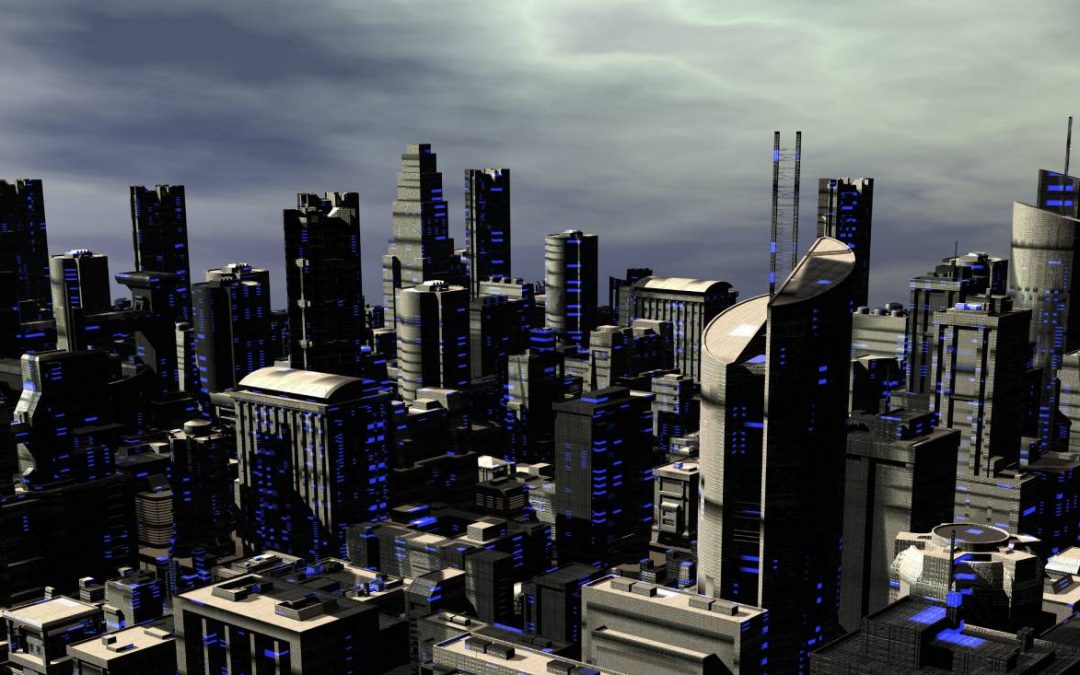 I have noticed that a lot of dystopian future art and movies use architecture to reveal the full picture or thicken the plot. The architecture seems to project the nuances and subtleties in the storytelling of any piece of art or movie where the setting features prominently.

The dystopian classic, Metropolis, is a good example of this. Directed by Fritz Lang in 1927, Metropolis belongs to the era of silent film. In silent films, the narrative and limited dialogue was delivered by title cards. Because of this, I believe that Lang relied heavily on the architecture in Metropolis to support the development of the characters and move the story forward.

The futuristic city where Metropolis is set is divided between the working class who live in poor conditions and the upper echelons of management and industrialists who live in comfort. The storyline follows the tried and tested forbidden love formular, where the City Master’s son falls in love with a girl from the lowly working class.

As if reverberating and amplifying the impossibility of the situation that the two lovers find themselves in, the architecture in Metropolis is brutal and unforgiving, structured in vertical layers to signify the social strata pervading the system.

Now I know that the Lord of The Rings series are neither futuristic nor dystopian movies. But I would hardly be at peace if I did not discuss the critical role that architecture plays in these movies. The main antagonist throughout the LOTR trilogy is Sauron. Once a servant of Aulë, time and blind ambition twisted him into the Dark Lord.

He already rules the land of Mordor, and with the “One ring to rule them all”, the whole of Middle Earth would bow at his feet. The only thing standing in his way is that pesky, little hobbit, Frodo Baggins – the Ring-bearer.

Sauron is portrayed as a disembodied great eye watching over Middle Earth from atop a tall tower rising high above the wasteland of Mordor. In this case, the tower – an architectural element – acts as the perfect supporting character in LOTR. Composed of walls, battlements and gates that appear to be made of iron and stone, the tower is dark, twisted, jagged-edged and spiky.

The aesthetic was so effective that every time Sauron’s tower appeared on my screen, I was reminded about how the fate of Middle Earth hang by a thread, while Frodo made his precarious journey to cast the ring in the fires of Mount Doom.

A few years ago, I created a graphic novel called, Ananiya the Revolutionist. Set in the near-future where every aspect of life is dominated by a corporation, it is a dystopian story that explores the concept of resistance in an economy-based dictatorship.

It was meant to be an elaborate three-part saga with multiple, winding subplots and complex characters. As you can guess, I over-reached myself and ended up completing only the first chapter of this graphic novel. But I thought it would be great to revisit some of the aesthetic concepts and explore them from the point of view of dystopian future art.

The setting of my graphic novel is a space habitat, a colony in outer space. It was built back in the mid-21st Century as a solution to the shortage of habitable land since abrupt climate change had made most of Mainland Earth uninhabitable.

The colony is pretty much this gigantic hunk of technology drifting from asteroid to asteroid, mining precious resources until they are depleted, and then it’s onto the next. But these operations are hidden, happening behind the scenes. The colony is deceptive in that if you were to visit it, the first thing that would confront you is its super city, Arcanarc.

I explore dystopian future art to portray a city where the inhabitants are oppressed. Freedom of expression is prohibited on Arcanarc. And so, the Arcanarcians have lost their individuality. They all look the same and think the same.

As Ananiya, the protagonist in the story, would describe it: “It’s a mecca out here; that’s if you are a brainwashed zombie. Not so fun for those of us who aren’t buying the One Consciousness Corporation and the higher conscience crap they claim to be all about.”

The architecture on Arcanarc is shiny, polished, cold and impersonable. At the epicentre of it is the chrome tower from where the Corporation wields absolute power.

To every Yin there is a Yang. Beneath the shiny surface, deep in the bowels of the colony’s substructure is the city of Arachnida, the stronghold of the resistance. It is a maze of tunnels where there is no sunlight. Here, hidden away from the all-seeing eye of the Corporation, everyone can be themselves.

True to dystopian future art fashion, Arachnida is a subterranean lair fully equipped with communal facilities that include sleeping bunkers, a kitchen, common rooms, and an underground courtyard. The architecture depicts spaces that are dark and claustrophobic.

However, the extensive use of natural stone and raw rock against the high-tech backdrop hints to the solidarity that the members of the resistance must embody in order to raise a formidable force against the corporation.

An analogy of this resistance would be the earth standing steadfast on solid foundations, even as she weathers storms and tides. My dystopian future art is hopeful that in a world of absolute power systems, the very nature of man to self-determine and his capacity to mobilize resistance in this determination, will in the end win the day.