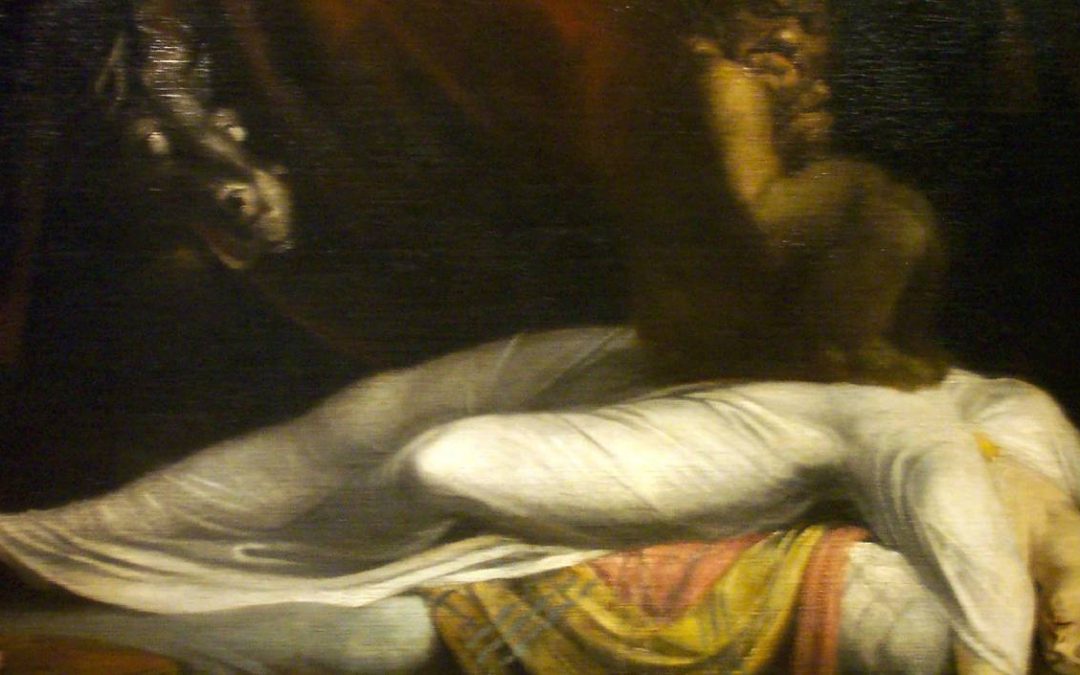 I am no art expert, but as an artist who is a fan of horror, the work of Henry Fuseli fascinates me, particularly the work he is most famous for, The Nightmare. Henry Fuseli’s The Nightmare is a painting that depicts a woman sprawled on a bed while presumably having an unsettling dream about being stalked by two ghastly demons from hell. It may be one of the first paintings to portray psychological rather than physical terror. Physical terror is a well-founded fear of an immediate and material threat, whereas psychological terror is a feeling of fear that comes from within your own mind. It is more about the fear of the unknown. And Henry Fuseli’s The Nightmare certainly exploited this fear. But first some context before I go on with this subject.

WHO WAS HENRY FUSELI?

Henry Fuseli was a famous Swiss artist who was born in 1741 and lived during an era when art in Europe was undergoing a transformation. Museums were being established for the first time, and more artists were turning from amateurs to professionals. Wealthy patrons began to commission large pieces of art to display in their drawing rooms. This period saw the rise of Neoclassicism, Romanticism, and Realism, all of which had a major impact on European society.

It was a new age of scientific and liberal enlightenment, and yet moralistic reverence and realism were the norm in European academic painting. It was in this environment that Henry Fuseli experimented with new painting styles and techniques, as well as themes. He revelled in the macabre and fantastical. His paintings were dark, atmospheric, and frightening, and often dealt with themes such as death and supernatural horror. Some of them depicted dramatic scenes from literature and mythology, like Shakespeare’s Macbeth and Dante’s Inferno. Fuseli played on the spectator’s primal fears and instincts in paintings that would often marry the supernatural with the erotic.

The Neoclassical period in which The Nightmare was painted was also a time of upheaval in Europe. The French Revolution and the Napoleonic Wars brought about a sense of anxiety, uncertainty, and instability in Europe. This had an impact on the art that was created during that period, which was often characterized by an emphasis on order and stability to impress a sense of calm in a time of turbulence. But not Henry Fuseli’s The Nightmare. It instead played into the anxiety, turmoil, and terror. The spectator, with his or her already frayed nerves, was shocked, titillated, and frightened by the stark horror, sexuality, and morbidity emanating from its layered depths.

To the modern spectator, who has probably grown up on a staple of gory indie films, slasher flicks, gruesome horrors, and walking dead movies and shows, all the fuss about The Nightmare may be much ado about nothing. But try to put yourself in the prudish mindset of the 17th Century spectator, and perhaps you will appreciate how mortifying Fuseli’s composition was. The woman in the painting is swathed in white light in sharp contrast to the shadowy background. She is sprawled across a bed, lips slightly parted, her flailing arms, neck, and head dangling over the edge of the mattress, while a grimacing, ape-like creature crouches on top of her chest. She is the focus of yet a second creature emerging from the shadows, a horse with a contorted face, glowing eyes, and flared nostrils.

Perhaps what was most frightful about this painting was the implication that the creature crouching on the unconscious woman’s chest was an imp or an incubus, a type of spirit believed to lie on top of people in their sleep or even have sexual intercourse with sleeping women. Fuseli’s painting is not explicit, but rather suggestive, leaving room for the possibility that the woman is only dreaming. And yet, the tension is heightened as her dream appears to take a frightening turn when it manifests in the physical forms of the incubus and the horse. It is interesting that unlike the paintings that were popular in that era, Henry Fuseli’s The Nightmare has no moralizing subject. The scene is an invented one, a product of Fuseli’s imagination.

Intentionally or unintentionally, Henry Fuseli may have depicted a phenomenon that is today widely known as Sleep Paralysis. Sleep paralysis is the sensation of not being able to speak or move when you wake up. Sometimes you may experience hallucinations like being touched or hearing voices, and you may even get the feeling that something is weighing down on your chest. This feeling may only last a few seconds, but it can be scary and could leave you in a state of panic.

Typically caused by a lack of oxygen, sleep paralysis occurs as the brain wakes up before the body does during the period of deep sleep when dreaming is most likely to occur. This means that your conscious mind is awake while your physical body which is still asleep cannot move or speak. Historically, this phenomenon was considered to be the work of demons, particularly incubi, which were thought to sit on the chests of sleepers. The idea of this malevolent, supernatural presence is a universal terror that has spun terrifying folklores in many cultures around the world.

In Scandinavia, there are folklores about a Mare. This is a damned woman whose body is mysteriously transported through the village while she sleeps. Unknowingly, she visits the slumbering villagers to sit on their chests, causing them to have nightmares.

In Fiji, the sleep paralysis is believed to be the spirit of a recently dead relative who has come back for unfinished business. The person waking up from the experience must immediately curse or chase away the spirit of the dead relative, which literally involves yelling expletives.

In Turkey, the sleep paralysis is thought to be a supernatural being known as a Jinn. It comes to the victim’s bedside, holds him or her down hard enough to prevent movement, and strangles them in their sleep. If the victim is courageous enough to grab the wide-breamed hat that the jinn wears, the tables are turned around and the jinn becomes his or her slave.

In Zimbabwe, sleep paralysis is called Madzikirira, which refers to something strongly pressing one down. This sensation is caused by a spirit from the spirit world who tries to use its victim for nefarious purposes. Since it is believed that curses only have power through the bloodline, the spirit tries to get the victim to bewitch their own relatives.

In Brazil, there is a legend about a mythological creature called the Pisadeira. It is described as a tall, skinny old woman, with dirty long toenails, glaring blood-red eyes, white tangled hair, and a deranged laugh on her twisted lips. She lives on the rooftops, waiting to step on the chests of those who sleep with a full stomach.

Coming from a strong theological background, Henry Fuseli’s intellectual interests would evolve along more philological and humanitarian lines, and thematically his art would become famous for its intense emotional content. With the great change in attitudes towards art, society, and culture, Henry Fuseli belonged to a school of artists in the Neoclassical period that saw themselves as isolated geniuses. The word “genius” is derived from the Latin word for “to beget”. As such, they had a sense of self-importance and were not afraid to take risks. These artists believed that their creativity was so powerful that it could create life by bringing forth new ideas and images into being. Undoubtedly, Henry Fuseli’s The Nightmare accomplished this.

If you want more stories and art, or to get the first scoop on all the cool stuff we have got to share, click here.

Dimitriu, Alex Dr. (2020, August 6). What You Should Know About Sleep Paralysis. Retrieved from https://www.sleepfoundation.org/parasomnias/sleep-paralysis