The Mystifying Appearance of UFOs in Old Paintings 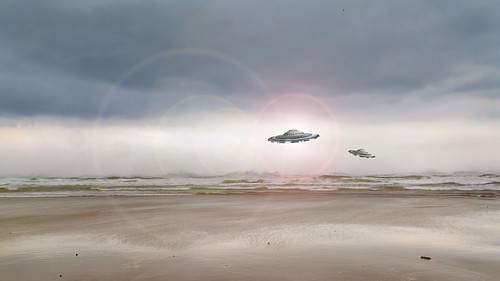 I do not believe that we are alone in the universe. I do, however, have a hard time believing proof of UFOs and alien sightings in this day and age when technology at our fingertips increasingly blurs the line between what is real and what is not, throwing into question that old adage, “Seeing is believing”. All it takes to manipulate reality into some sort of pseudo-reality on our social media channels is a smartphone and a few clicks of the button. Seeing is no longer believing.

But what if we could find evidence of UFOs and alien existence dating back to a time long before advanced technology ever existed, would this proof be believable? What if there was evidence of UFOs in old paintings?

Archeologists in India have discovered cave paintings in Charama region that researchers believe date back to around 10,000 BC. These paintings depict objects that bear an eerie resemblance to the flying saucers portrayed in science fiction movies and TV shows. So compelling is this discovery that the Chhattisgarh State Department of Archeology, which falls under the Charama jurisdiction, approached NASA for help to further investigate these perplexing rock paintings. Could this be evidence of ancient alien activity, or is there a more rational explanation? While we still don’t know what these paintings actually mean they provide an interesting glimpse into our prehistoric past.

Mysterious rock art was discovered in Tanzania. Ok, so this wasn’t exactly UFOs in old paintings, but rather cave paintings resembling alien-like anthropomorphic figures dating back hundreds of years. Discovered in Swaga Swaga Game Reserve by Maciej Grzelczyk, a Krakow academic, the paintings also depicted what appeared to be meteors and comets, which is very rare in African mythology from that region.

One of the paintings depicts a thin, tall humanoid with a geometric head topped with antenna, towering over an elephant. Yet another painting portrays a lone figure with a pumpkin-shaped head and large, orb-like eyes, closely resembling the stereotypical “little green men” pervasive in science fiction. While these archeological findings are mind-boggling, Grzelczyk speculates they may be related to creation mythologies that formed part of the belief system before the advent of Christianity.

UFOS DEPICTED IN A MEDIEVAL CHURCH

When historians in the town of Sighisoara, Romania were examining a medieval church wall they discovered a painting that appears to depict a UFO. The 17th Century painting depicts a burning church engulfed in billowing smoke. Above the church what appears to be a flying saucer – complete with pulsating lights – can be seen spiraling downwards through the smoke, a blast of exhaust in its wake. Considering that at the time this painting was created there were no airplanes or manmade flying machines, many have been led to speculate that this could be evidence of aliens visiting earth in ancient times.

Continuing with the subject of UFOs in old paintings, it’s hard, when looking at the Crucifixion of Christ painting from 1350, not to take notice of the two flying pods in the background. The wall painting, located at the Visoki Decani Monastery in Kosovo, is typical of the Eastern Orthodox visual style. The focus of the painting is a depiction of Christ crucified on the cross. But if you take a look at the extreme upper corners in the left and right panels of the painting, you will see what appears to be flying pods. Rays of light burst out of the pods, and closer inspection reveals what look like tiny spacemen piloting the pods. Some point to this as yet more proof of early visitations to earth by aliens from space. However, critics dismiss such claims, arguing that the “flying pods” are in fact stylized representations of the sun and the moon according to Eastern Orthodox iconology.

I would not be so arrogant as to presume that besides humans there are no other intelligent, or at the very least sentient beings in this vast universe that is 2 trillion galaxies wide. But I think it would be wise to take the alleged depictions of UFOs in old painting as unequivocal proof of alien existence with a grain of salt. After all, it is likely we may be simply misinterpreting symbolisms from a time and era long lost to us.

Math, like science, does not lie. What if there was a mathematical method of determining that we are not alone in the universe? As it so happens, there is. According to the Drake Equation, it’s not a matter of whether aliens exist or not, but rather how many alien civilizations there could be out there.

The Drake Equation was formulated in 1961 by Frank Drake, an American astronomer and astrophysicist, who is also the founder of the Search for Extraterrestrial Intelligence or SETI. The Drake Equation estimates the number of extraterrestrial civilizations in our galaxy that could be capable of communicating with us. It takes into account various factors like the odds of there being habitable planets around other star systems, the possibility that life will emerge on these planets, and the probability that biology will randomly evolve into intelligent life. The calculations include extrapolating the rate of star formulation in our galaxy and the percentage of those stars that have planets, and scientific stuff like that beyond my comprehension.

The Drake Equation may one day be able to definitively answer the question of whether we are alone in the universe. But for now, much of the criticism it draws focuses on the fact that the estimated values for several of its factors are highly theoretical, the cumulative effect being that the uncertainty associated with any derived value is so large that the equation cannot be used to draw any substantive conclusions.

If you liked my story about UFOs in old paintings and want to read more stories from me, subscribe here. By subscribing, you never have to miss another update on stories just like this one.