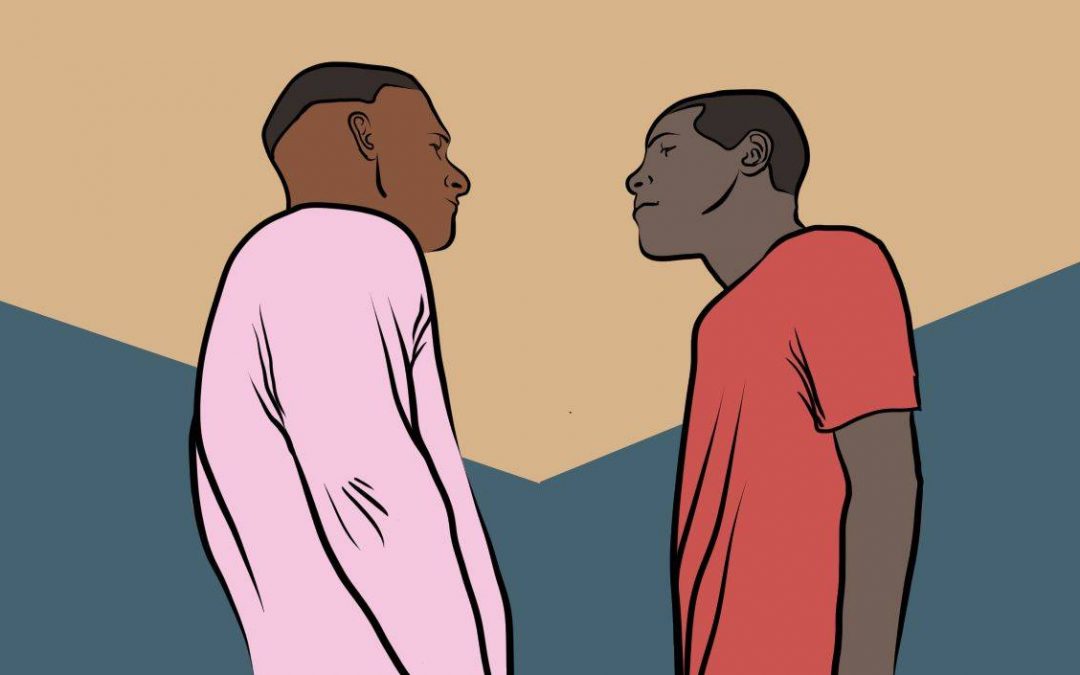 I run my hands over the wads of money to make sure this is not some kind of hallucination. The notes are crisp – and real – under my touch. I treat the sneakers to the same scrutiny, and nothing about the solid feel of them suggests a departure from reality. I sink onto my bed, a bundle of cash in each hand. This is real; it’s happening. But how?

John’s laughter echoes in the corridor, throwing me into another panic. I stuff the money and sneakers under my bed and sit at my desk, opening a random textbook just as John enters the room. Thandie is with him. They pause, eyeing me. Do I look flustered? Guilty?

“Hey,” I say. A bead of sweat crawls down the side of my face, along my side-burn. It stops on the hinge of my jaw, and I feel it quivering there, ready to free-fall and splash onto the desk.

“Are you okay, Roomie?” asks John.

“Yes, yes. Just, you know, hot.” My gaze flickers over Thandie, and she raises her eyebrows. “I mean me, I’m hot. Because of the temperature in the room, naturally. Not because…not for any other reason. So, balcony.”

I grab my notepad and dive out onto the balcony, pursued by John and Thandie’s laughter. I don’t blame them. I somehow always manage to make a fool of myself in Thandie’s presence.

The sounds of student living surround me. Loud music, loud voices, the eery call of feral cats mating in the bushes that frame the square down below. Monk Square, someone nick-named it, and the moniker stuck. Illuminated by the light pouring down from the student hostels that flank each side, Monk Square is a scene of students chatting in groups or strolling the paved walkways or stopping to buy bread rolls from a woman who has set up a temporary stall, a baby strapped to her back.

I take the pencil out of my pocket. If it can draw things into being, then the eraser on the tip of the pencil should be able to reverse the process, right? I can rub out the money I drew, the sneakers too, and throw the pencil away. No harm done.

Who would I harm by keeping the money? After all, I didn’t steal it. Technically, I worked for it. Drawing is not easy; it’s hard work. But I can’t turn up at the bank to deposit a wheelbarrow full of cash and expect not to get arrested.

I sigh, turning the pencil over and touching the pink rubber to the first sketch of a wad of cash. It’s painful, rubbing the lines out. I feel like I’m erasing my future. I’m keeping the sneakers. Those stay. Done, I flip the notepad closed and turn around to get back inside. John meets me at the open balcony door.

“But I’m tired.” I’m whining, like a child. I wish I could take the words back. “I have an early lecture tomorrow.”

John’s smirk widens into a sneer that drips with superiority. He doesn’t question his entitlement to throw me out of my own room, I’m sure; nor does he doubt that I’ll slink off without any further protests. He’s right. I take the staircase down to the Square. Sit on a concrete bench that faces my balcony door. Thandie comes to the door. She stands on the threshold like a bird about to take flight. Do our eyes meet across the square? I swear they do. I start to rise, heart hammering. But then she closes the curtains, shuts me out. And I sit back down on the cold, hard bench.

The square quietens around me. The woman selling bread rolls goes home. One by one, the windows in the hostels go dark. Someone, perhaps the same person who named Monk Square, nick-named these four blocks of hostels The Ruins. Apt name. They were the first to be built, and look shabbier than the other hostels scattered across the campus. It is never completely silent in the Ruins. There’s always a light on somewhere; a monk walking through the square on their way to study in a lecture theatre or just out for some fresh air. Or a drunk fresher who decides to slump down next to you, even though there are three empty benches to choose from close by.

I draw a few more lines before replying. “A bank statement.”

The fresher laughs hysterically. “You’re not a bank. Why drawling a bank shtatement?”

Because drawing a money transfer into my account is a lot less cumbersome than depositing huge amounts of cash.

And because, despite Monk Square still rustling with life around me, I’m frozen in loneliness. I will remain lonely, shut out, if I don’t show Thandie that I can give her everything she needs.

I add another few zeros to the cash transfer, writing, National Lotto, as the depositing party. Massive lottery windfall; not a bad cover story, hey?

A wolf whistle splits the night. I glance at my balcony, where Mafuta, shirtless, whistles down at me again as he zips up his jeans.

“Are you sleeping down there or what, Roomie?” he calls.

Anger burning my throat, I return to the room. Mafuta and Thandie are out on the balcony, talking in low voices. Thandie’s doing most of talking, asking John to walk her back to her hostel. His refusal is in his deep sigh. If I were her man, she would not have to beg me to do my duty.

While they’re out there having their debate, I sink to my knees and peek under the bed. The money’s gone, but the sneakers are still there, un-erased. Triumph dissolves my anger. I don’t need to check my banking app to know that there’s a new transaction in my account; a deposit with enough zeros to change my life forever.

“Nice sneakers,” says John. He’s lounging on his bed, not seeming in a hurry to get to his lecture. “Limited edition?”

I pick up my backpack. “Next time, go to a lodge. Or better still, treat her with respect.”

John slowly sits up. “What did you say?”

I stand to my full height, square my shoulders; stare back at him. “And you can wash your own stinking clothes from now on. There’s no chola boy here.”

I leave Mafuta sitting there with his mouth hanging open, catching flies. Never seen him without a smirk, sneer or superior expression. The dumbfounded look suits him better and improves my mood infinitely. I add a little bounce to my step all the way to the lecture hall, smiling like I won the damn lottery. Oh, wait, I did! Sort of.

Now all I’ve got to do is win Thandie’s heart.

If you want to read more from us, subscribe here. By subscribing, you never have to miss another update on stories just like this one.